You are here: Home / Blog / The Ansel Insider / A “Tragedy” on the High Trip

As an avid outdoorsman, Ansel Adams was no stranger to the hardships of camping in the backcountry. Far from the creature comforts of home, hiking miles upon miles each and every day, even America’s most famous outdoorsman could find himself overwhelmed. But for Ansel, the harsh realities of the outdoors were not merely a source of frustration. They were a source of great humor as well.

Which is why on the Sierra Club’s 1932 High Trip—the High Trips were the Club’s large annual excursions into the mountains of the American West—Ansel decided to debut his One-Act mock-Greek Tragedy, Exhaustos. 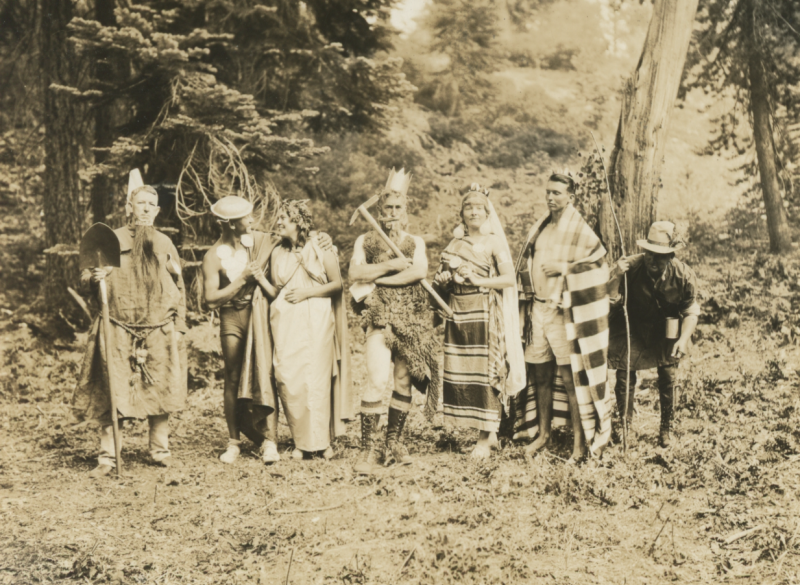 The 1932 trip proved itself exceptionally difficult, even for the most hardened campers. Frozen water pails, piles of snow, and elevations north of 12,000 feet made the going slow and tough. But, as a means of lifting the group’s spirits, Ansel collected the campers to put on a production of Exhaustos: A Lyric Tragedy.

Ansel did not admit to writing the play, rather insisting that he was merely its translator—a nod to his farce that it was some long-forgotten text of Euripides or Aristophanes. The play, containing “One-Act, Thank God” was performed by the campers themselves around the evening campfire. 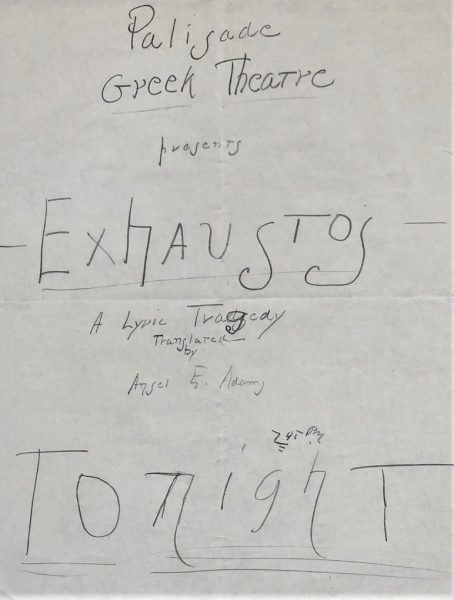 Exhaustos tells the story of King Dehydros—ruler of the land of Exhaustos—and his antagonist, Rhykrispos, a would-be king from a different camp. The play pokes fun at the many discomforts of life on the High Trip—from the banality of beans and hardtack, to the annoying ants in the King’s bed. Says the King:

By Hades! We have fallen in the ways of overeating!
But tomorrow we shall climb the ten thousand feet Our Glory must continue over-rising!
Tell Ali to groom Pegasus, my Mule!
And shake the ants from out Dehydros bed.
Last night they drove me wild.

Replacing the traditional Greek Chorus with the “Chorus of Weary Men,” and the “Chorus of Sunburnt Women,” the play offered campers a cathartic laugh at their own discomfort. The complaints of the campers registered dramatically in unison:

Woe! Woe!
Our soles have parted from our boots
Our pants are torn in much to many places.
Woe! Woe!
Last night it rained. Aihr, Aihr
We are too tired to even wash our faces
Woe! Woe! forever Woe! 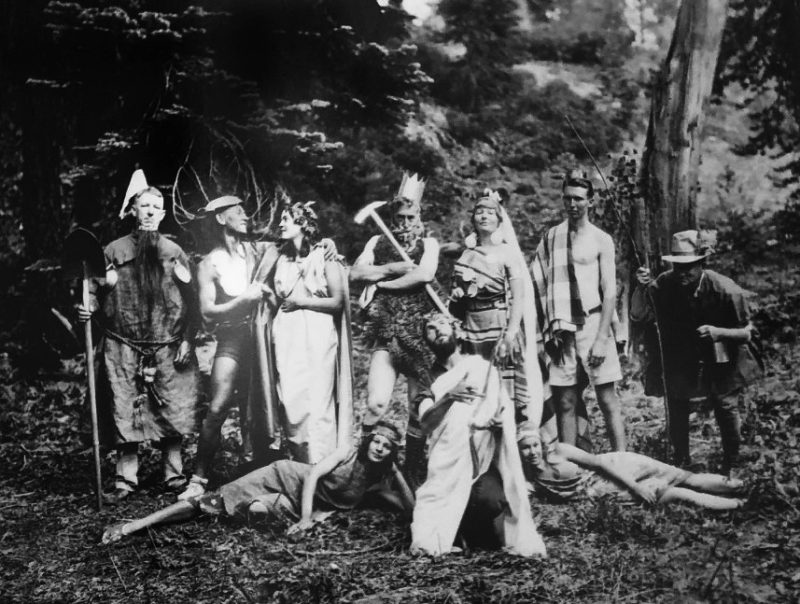 TAKE TWO: A similar photo as above, but this time with Ansel Adams dressed as the Spirit of the Itinerary in the foreground. Sierra Club High Trip, California, 1932. Image from “Looking at Ansel Adams” by Andrea Stillman

Costumes were derived from what could be found on hand. Ansel himself played the “Spirit of the Itinerary”—perhaps the Greeks would have called him Fate—with a bedsheet toga, an ivy crown, and a lyre fashioned from found wood and fishing line.

With Pegasus, his trusty mule, by his side, Dehydros finally squares off against Rhykrispos at the Summit of North Palisade. When King Dehydros finally dies—it is a Greek tragedy after all—by falling on his ice pick, the Spirit of the Itinerary offers this parting monologue:

Thus ends the sad epic of Dehydros the King
Who ruled Great Exhaustos, his glory we’ll sing.
But Destiny favored the reign of a Nomad
Who made Clymenextra depart home and go bad.
Now this is the Moral, match men, envy and food
Lest you be disgraced by a wandering Dude.