The story of the making of the photograph Moonrise, Hernandez , New Mexico is legendary. Ansel’s description in Examples: The Making of Forty Photographs is oft repeated, and quite dramatic. We have brought together several vignettes that put a little more perspective on what let up to the dramatic moment on a lonely highway at 4:05 PM (local time), October 31, 1941. 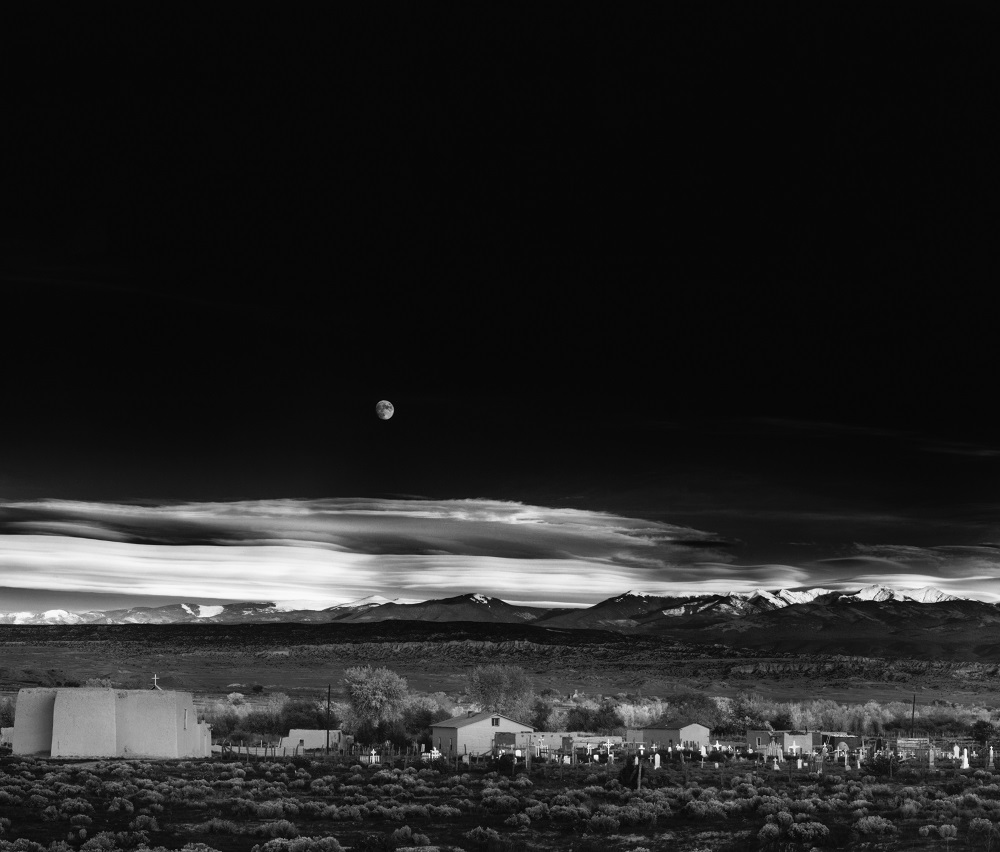 From Ansel Adams, in Examples:

“I had been photographing in the Chama Valley, north of Santa Fe. I made a few passable negatives that day and had several exasperating trials with subjects that would not bend to visualization. The most discouraging effort was a rather handsome cottonwood stump near the Chama River. I saw my desired image quite clearly, but due to unmanageable intrusions and mergers of forms in the subject my efforts finally foundered, and I decided it was time to return to Santa Fe. It is hard to accept defeat, especially when a possible fine image is concerned. But defeat comes occasionally to all photographers, as to all politicians, and there is no use moaning about it.

We were sailing southward along the highway not far from Espanola when I glanced to the left and saw an extraordinary situation—an inevitable photograph! I almost ditched the car and rushed to set up my 8×10 camera. I was yelling to my companions to bring me things from the car as I struggled to change components on my Cooke Triple-Convertible lens. I had a clear visualization of the image I wanted, but when the Wratten No. 15 (G) filter and the film holder were in place, I could not find my Weston exposure meter! The situation was desperate: the low sun was trailing the edge of the clouds in the west, and shadow would soon dim the white crosses.

I was at a loss with the subject luminance values, and I confess I was thinking about bracketing several exposures, when I suddenly realized that I knew the luminance of the moon—250 c/ft2. Using the Exposure Formula, I placed this luminance on Zone VII; 60 c/ft2 therefore fell on Zone V, and the exposure with the filter factor o 3x was about 1 second at f/32 with ASA 64 film. I had no idea what the value of the foreground was, but I hoped it barely fell within the exposure scale. Not wanting to take chances, I indicated a water-bath development for the negative.

Realizing as I released the shutter that I had an unusual photograph which deserved a duplicate negative, I swiftly reversed the film holder, but as I pulled the darkslide the sunlight passed from the white crosses; I was a few seconds too late!”

From Michael Adams, Ansel’s son and one of his early (although non-technical) assistants:

“Ansel was driving, and Cedric was in the passenger seat. I was eight years old, half listening to the banter, watching the world fly by out the window. We were in Ansel’s old Pontiac station wagon, heading back to Santa Fe. It had been a long day, and not, apparently, very successful.

I don’t really remember any discussion about the potential of Moonrise at the time, only that we were moving really fast. Ansel was by nature prone to driving fast, but skilled and certainly not reckless. It was quite a shock, therefore, to suddenly be on the gravel shoulder of the road, fishtailing and dust flying as Ansel slammed on the brakes.

Certainly not a direct quote, but at the end of it, Ansel knew he had something. He didn’t find the light meter, but made he exposure based on the known luminosity of the moon – 250 foot candles. The rest, as they say, is history.”

He [Ansel] was acutely aware of his surroundings and how different scenes would likely look their best in different seasons or at different times of day, and he would often PLAN to be in the right place at the right time. Luck, of course, offers up many magic moments and Ansel dealt with these through his conviction that “chance favors the prepared mind!” Consequently he had PLANS for how he would handle a stroke of luck—both visually and technically.

A good case in point is the famed “Moonrise” event, which popularly paints a picture of Ansel careening down a road in New Mexico and suddenly coming across a mystical scene. The car screeches to a halt in a cloud of dust and flying pieces of photo equipment and with only seconds to spare, the Image is made. Well, I think the second part of the story is likely pretty close to the reality, but the “sudden discovery” part has been dramatized somewhat over the years. Having driven what is now Highway 84/285 southward along the Chama River valley many times, it is obvious that Ansel couldn’t have missed seeing the early moon rising through the clouds above the distant Sangre de Cristo mountains, perhaps from as far north as Abiquiu, and watched it for miles and miles before he came around the bend into Hernandez. He most certainly saw the potential of these elements as part of something greater and had to have been evaluating every feature on the east side of the road as he drove along for its possibility as THE winning foreground which would put all the elements together. Knowing Ansel’s fondness for cemeteries as subject matter, I wouldn’t be at all surprised if he remembered that there was a nice little one near a church just around the next corner, and that maybe THAT would work.

Paraphrase of John Sexton, Ansel’s technical assistant from 1979 to 1982.

In October 1941 Ansel Adams was 39 years old, probably in peak physical shape and certainly at or near the height of his field photography. He was well practiced in every motion, and the time that it takes to make a duplicate negative, to replace the slide, reverse the film holder, remove the slide and cock the shutter is less than 3 seconds. Given that the initial exposure was 1 second and the decision to make a duplicate negative occurred then, Ansel was very, very close to missing that image. It is a testament to his skills that we are able to appreciate it today.”

Did you have the fortune to know or meet Ansel Adams? If so, we would enjoy hearing about your Ansel encounter or how his work has influenced your photography or outlook on life. Use the form below or email Williams Garnsey at william@anseladams.com.