You are here: Home / Blog / The Ansel Insider / Mount McKinley and Wonder Lake 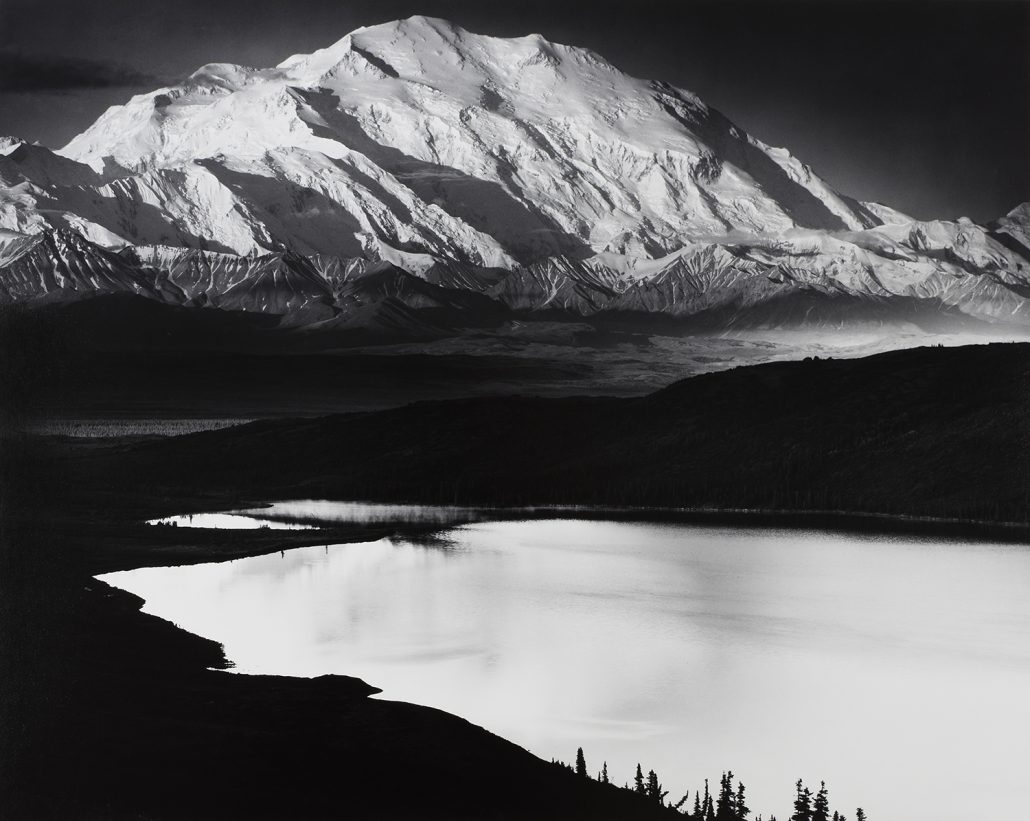 Ansel Adams’ “Mount McKinley and Wonder Lake” is one of the defining images of the Alaskan Wilderness. Ansel made this image when he, accompanied by his son Michael, set out in 1947 on a Guggenheim Fellowship to document the majestic landscapes of Alaska. Ansel had never before been to Alaska, and he chose to use the grant funding as a means to explore territory unknown to him and photograph the pristine wilderness.

“Upon receiving the first Guggenheim,” Ansel wrote, “I decided to travel to Glacier Bay and Mount McKinley (now called Denali) National Parks in Alaska….I felt Alaska might be close to the wilderness perfection I continuously sought.”

When they arrived at Denali National Park, Ansel and Michael stayed in the ranger cabin at Wonder lake waiting for the weather to clear. As anyone who has experienced an Alaskan summer knows, clear days are few and far between, with haze blanketing the mountain’s summit. The region’s atmosphere creates its own weather patterns from the radical elevation and moisture of the mountain’s glaciers. With these conditions, more often than not during Ansel’s trip to view it, North America’s largest peak was hidden from view.

One early evening after a week at the cabin with little luck, Ansel set up his 8×10 inch view camera to frame this image of Mount McKinley, thirty miles distant, then left for the cabin and went to bed. He rose at midnight, returned to his camera, and waited for dawn.

“At about 1:30 A.M. the top of the mountain turned pink,” he wrote. “Then gradually, the entire sky became golden and the mountain received more sunlight.” After he clicked the shutter, he tried two more photographs, “but within thirty minutes clouds had gathered and obscured the summit, and they soon enveloped the entire mountain.”

Ansel had photographed extensively in the Sierra Nevada, the Rockies, and the Southwest, but he had not encountered anything like the majestic scale of Alaska. The experience moved him profoundly and inspired him to strengthen his commitment to the conservation of wilderness. Reflecting further, Ansel wrote of his visits to Alaska in 1947, 1948, and 1949,

“I saw more clearly the value of true wilderness and the danger of diluting its finest areas” and he “resolved to dedicate as much of my time and energy to it as I could.”

In the following years, Ansel felt that a day had been wasted if he did not write or telephone at least one influential individual about the need to protect America’s wild places. A crowning achievement occurred in 1980, when President Jimmy Carter passed the Alaska National Interest Lands Conservation Act, the most substantial wildlands protective legislation ever to be enacted by Congress. Ansel had spent some time in Washington D.C. the previous year making the president’s official portrait. His mailing of photographs, frequent personal letters, and persuasive arguments to Jimmy Carter reinforced the president’s commitment to the protection of America’s wildlands.

As Bill Turnage, former President of the Wilderness Society in Washington D.C. wrote,

“Adams, perhaps more than any artist before, was able to send his art into battle.”

Our gallery also offers a digitally mastered print of this image from Ansel’s original photograph, starting at $129. Purchase this Modern Replica print.

Story Behind the Image: Monolith, The Face of Half Dome