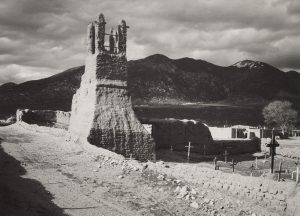 Taos Pueblo, a collaboration between a young Ansel Adams and feminist writer and bohemian Mary Austin, was published in 1930 in a small edition of 108 copies. Limited and hard to find, it is considered one of the greatest books produced by San Francisco’s renowned Grabhorn Press. The project was exceptional for its time – not only the intersection of two careers, photographer and writer, but of the American environmental movement and a movement by white women to promote Pueblo arts. Always an innovator, this lovely print from the 1970’s illustrates how Ansel was experimenting with modern papers to see if he could replicate the look and feel of the original Dassonville sensitized paper used in the Taos project. Although not one of the 108 prints that were bound for the book, “Ruins of Old Church, Taos” is the Plate 4 image. Exceedingly rare, this photograph comes to us from Anne Adams Helms collection and is the only exemplar we’ve seen outside of the published edition.