You are here: Home / Blog / The Ansel Insider / The Artists of the Manzanar Relocation Center

The Artists of the Manzanar Relocation Center

In 1943, in the midst of World War II, Ansel Adams received an invitation from an acquaintance at the Sierra Club, Ralph Palmer Merritt. Merritt asked Ansel to photograph a remote government facility in the Owens Valley, just east of the Sierra Nevada Mountains.

The facility was the Manzanar Relocation Center in Owens Valley, California. Merritt was its director, and at its peak, Manzanar housed over 10,000 interned Japanese-Americans. 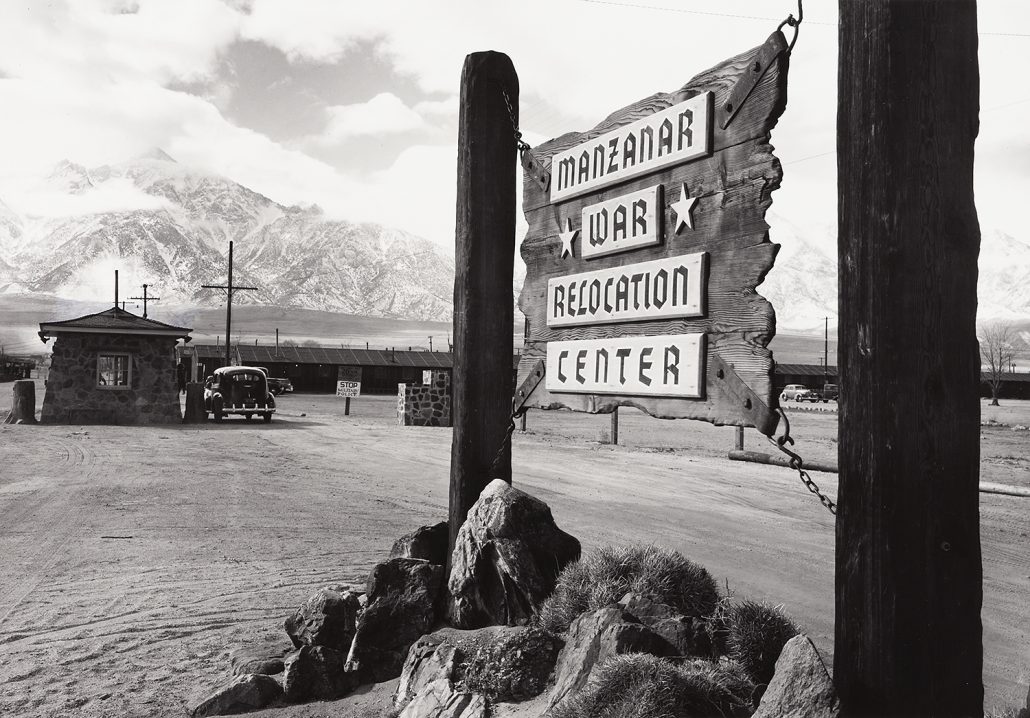 “Entrance to Manzanar” by Ansel Adams

In February 1942, three months after the attack on Pearl Harbor, amidst a wave of paranoia about domestic espionage, Franklin D. Roosevelt signed Executive Order 9066, authorizing the internment of nearly 117,000 Japanese-Americans. Most were U.S. citizens, forcibly imprisoned without due process.

“Relocation Centers”—a friendly euphemism for concentration camps—were established all over the West. Anyone on the West Coast with so much as a single Japanese great-great-grandparent was given six days to gather what belongings he could carry and dispose of the rest. Stashed away in remote corners, the prisoners were forced to begin their lives anew, behind barbed wire. 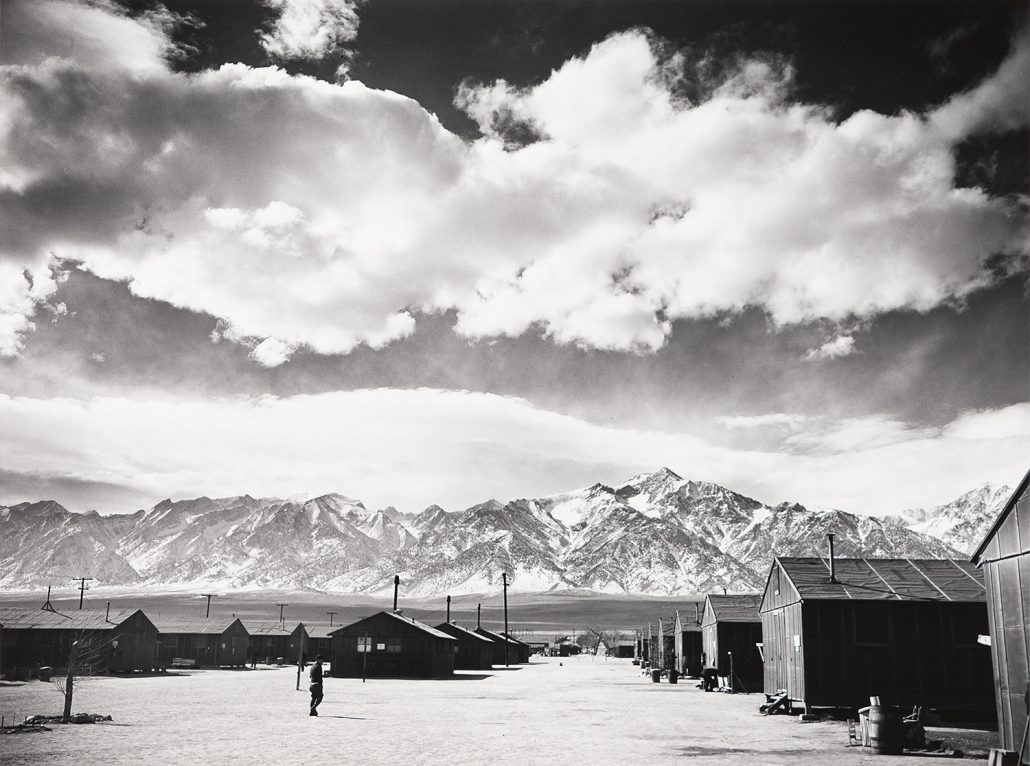 At Manzanar, every 20-by-25-foot room held eight detainees. Few furnishings were provided. Cots with straw mattresses, an oil stove, and a single hanging light bulb were all that decorated the rooms.

Ansel documented many of the people interned at Manzanar, including several artists within the camp. With the photographs he took and experiences he documented, Ansel eventually published Born Free and Equal. In a letter accompanying his photographs, Ansel wrote,

“The purpose of my work was to show how these people, suffering under a great injustice, and loss of property, businesses and professions, had overcome the sense of defeat and despair by building for themselves a vital community in an arid (but magnificent) environment.”

The Artists of Manzanar

When Toyo Miyatake, a Japanese-born photographer, learned that he would be relocated to Manzanar—forced to abandon his photo studio in Los Angeles’s Little Tokyo—he contacted a local carpenter. He asked him to fashion a small box, with a hole carved out on one end, just big enough for a lens. With his makeshift camera in tow, Miyatake set out to document his experience at Manzanar. 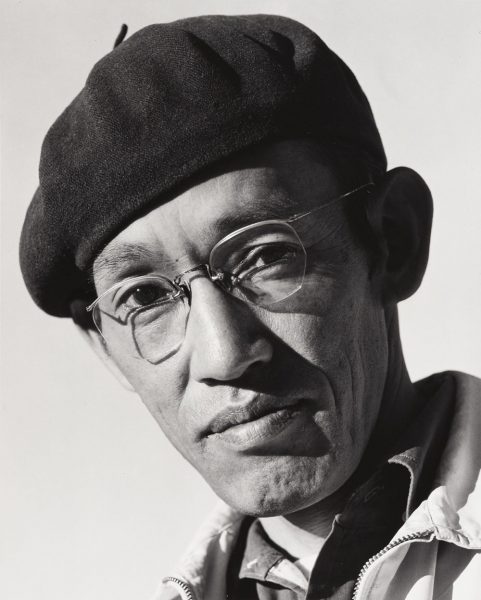 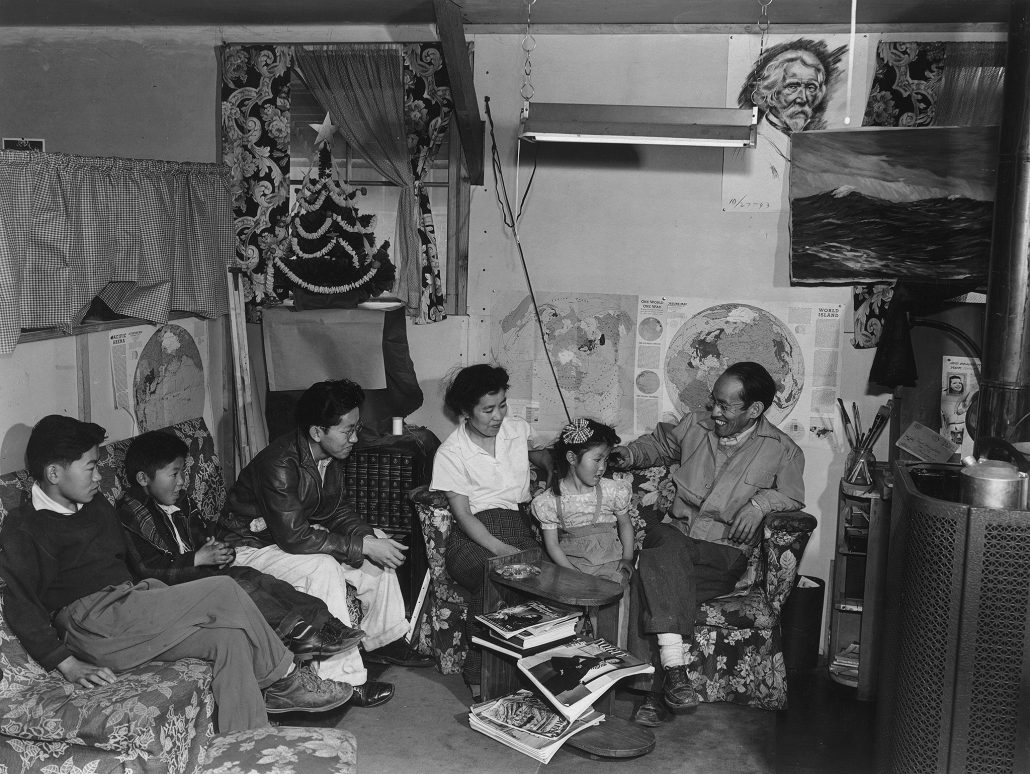 “He felt that, as a photographer, it was his duty to record this, so that nothing like this would ever happen again.”

Miyatake mostly shot at dusk and dawn, fearful of being caught. But when Merritt finally did catch him, Miyatake was not punished. Instead, he was appointed as the official photographer for the camp, with one rule: while Miyatake could set up his own camera and pose his own shots, a white person had to be the one to snap the shutter. 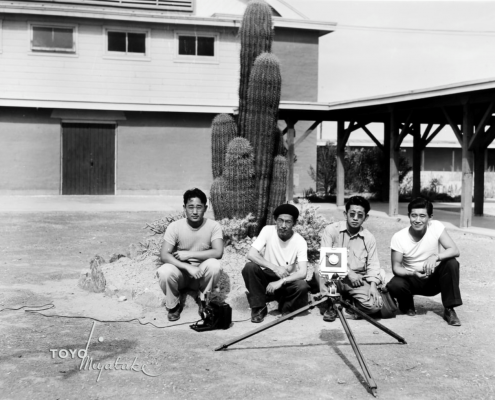 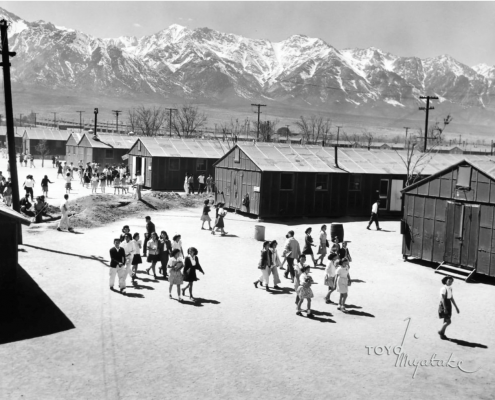 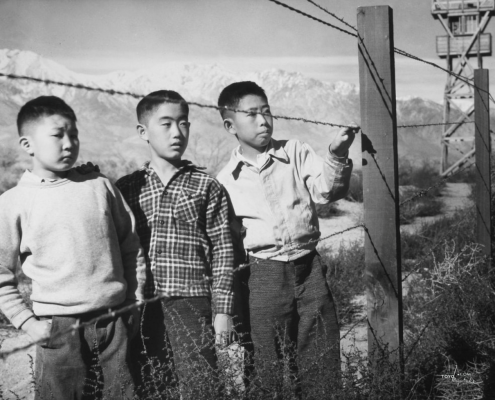 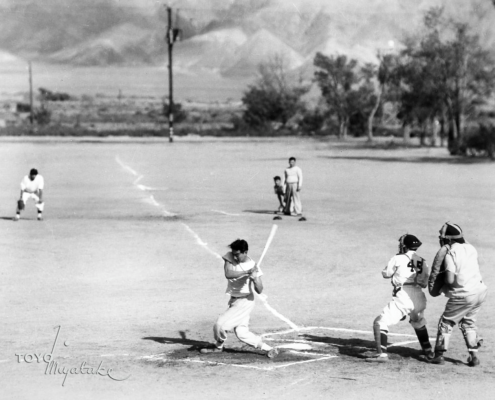 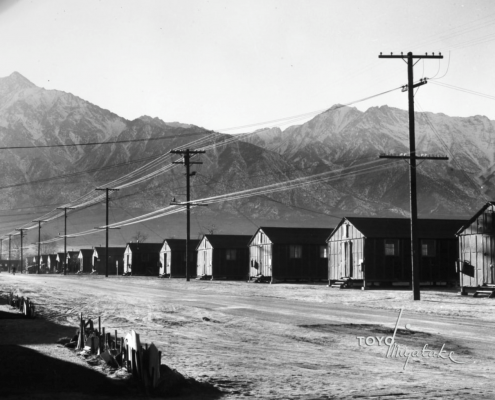 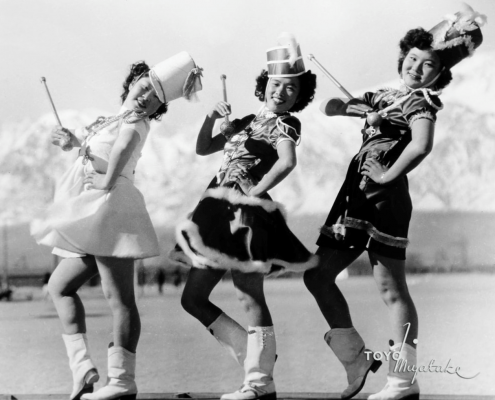 In C.T. Hibino, a painter interned at Manzanar, Ansel found a kindred spirit.

Hibino’s grand paintings of the Sierra Nevada—imagined, of course, without barbed wire obstructing his view—were reminiscent of Ansel’s famous natural scenes. Hibino’s sweeping scenes are a rich interpretation of the American west, following the landscape tradition of Albert Bierstadt, Thomas Moran and other landscape painters who captured their surroundings with careful detail and sublime light. 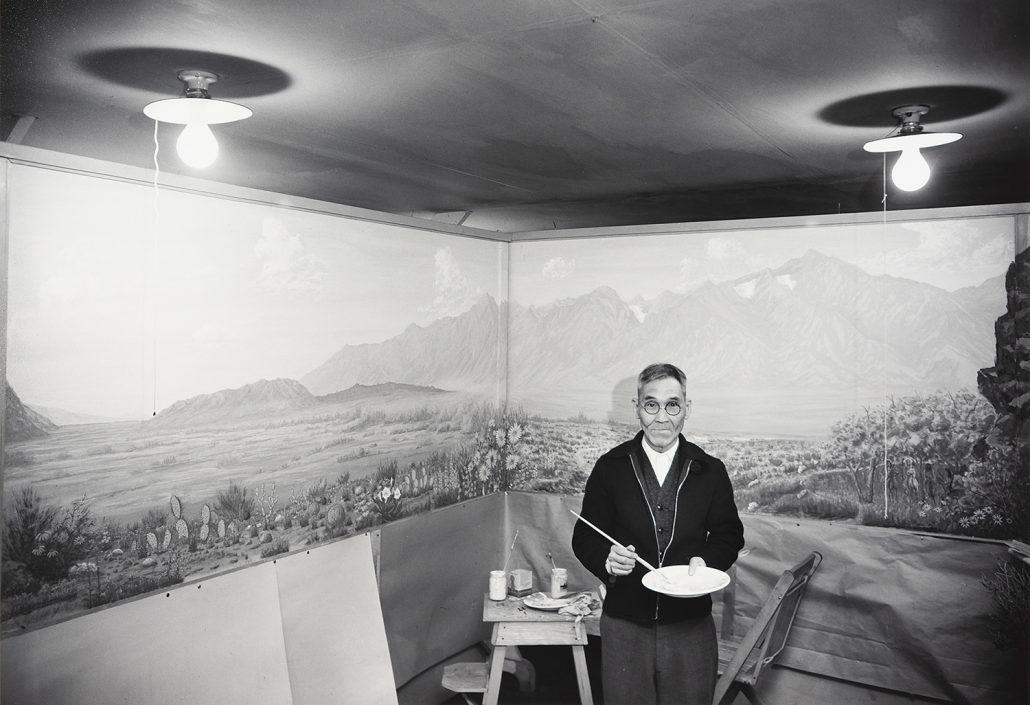 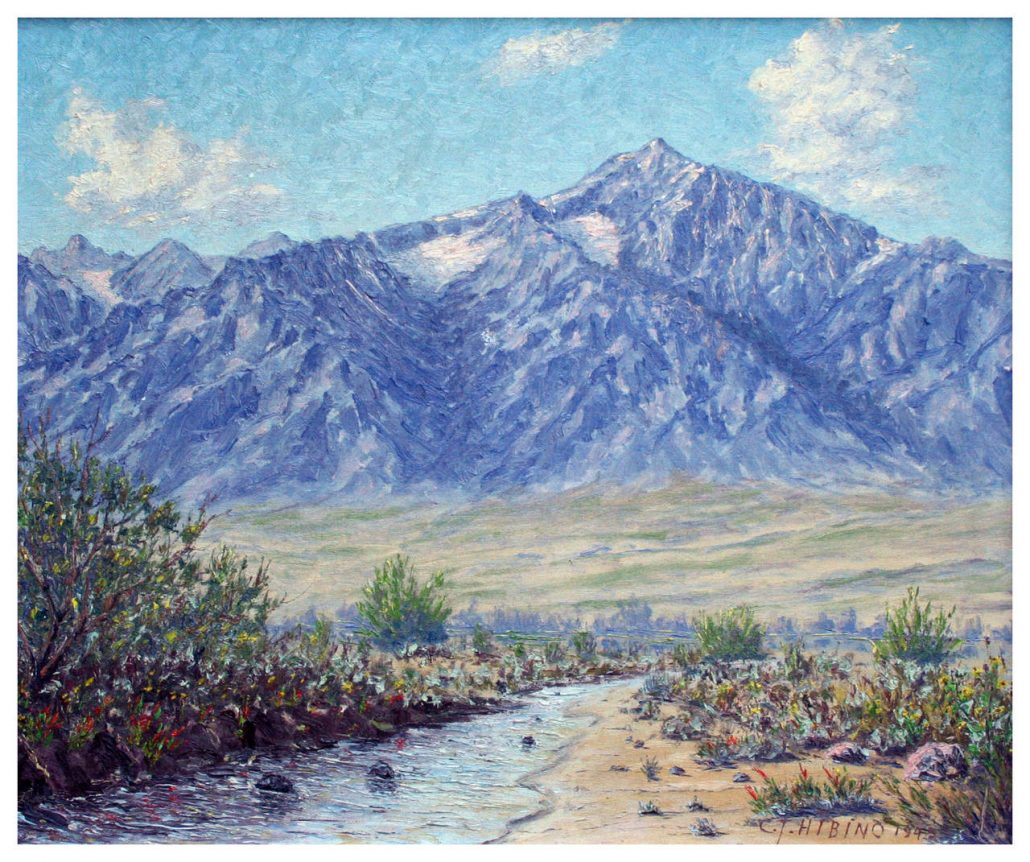 Even the arid land of the Owens Valley was turned into art.

While many worked in the farms and “victory gardens,” producing food for the war effort, the internees also managed to cultivate some more aesthetic crops: a traditional Japanese Zen garden. In Zen Buddhism, gardens are a very special place for peaceful contemplation, and the garden at Manzanar was the people’s way of carving out their peace in the desert.

“Under special permit trees and stones were brought many miles from the Sierra and set about with that persuasive informal formality of the traditional Japanese garden.”

Many gardens were created within the camps, and have become one of the most important collections of Japanese gardens in the country. They stand as symbols of resistance and resilience. 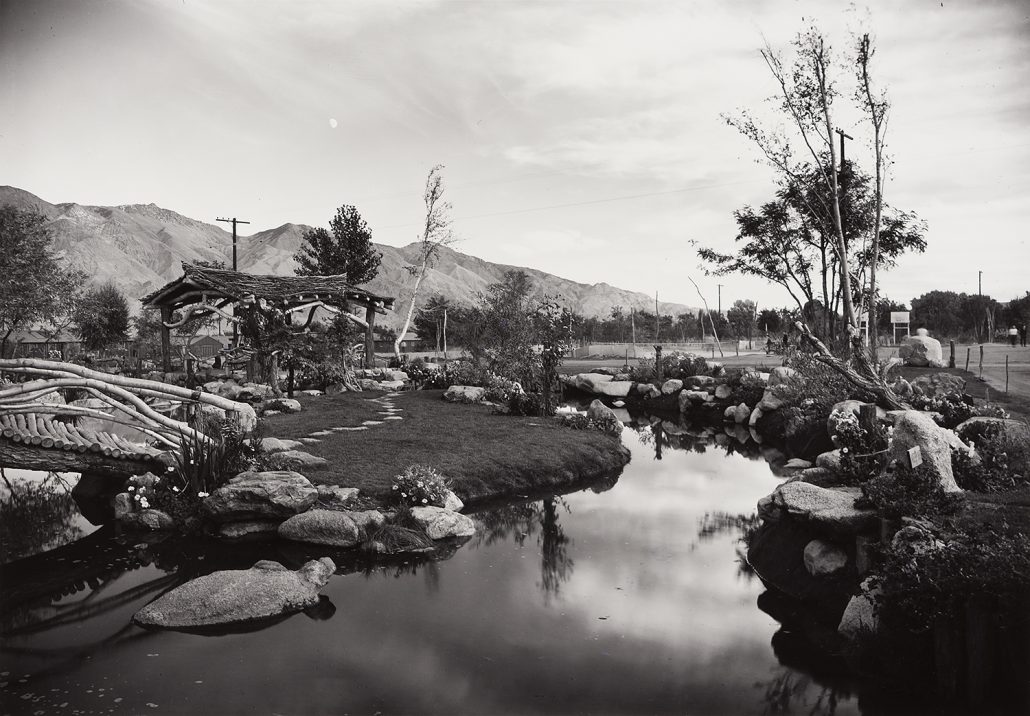 Today, Jeff Burton, an archaeologist at Manzanar National Historic Site, and his team have worked to uncover the gardens at Manzanar. Using newspaper accounts, oral histories, photographs, consultations with Japanese garden experts, and archaeological excavations, Burton and his crew—many of whom are volunteers—are finding and, in some cases, restoring or recreating the gardens. So far, 20 have been excavated, mapped, and stabilized.

The Internment of 117,000 Japanese Americans represents one of the darkest chapters in American history.

And yet, the story of the artists of Manzanar also speaks to the capacity of the human spirit to overcome adversity, and to find beauty where ordinarily there would be none to find.

As Ansel writes in Born Free and Equal,

“From the harsh soil they have extracted fine crops; they have made gardens glow in the firebreaks and between the barracks.”

By Ethan Simon, Creative Writer for The Ansel Adams Gallery

Light from a Distant Mountain
error: Content is protected !!
Scroll to top