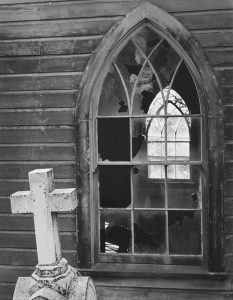 Travel back in time to Gold Rush country with Ansel Adams and his portrayal of yet another marvelous photograph of California history. Located in Tuolumne county, right outside of Yosemite National Park, St. Francis Xavier, was built in 1855 toward the end of the Gold Rush. The region became known as Chinese Camp due to the 5000 Chinese immigrants that lived there – first as gold miners, then as railroad workers. Reflecting the times and the stresses of both instant wealth and abject poverty, it became the site of the state’s first Tong War. First established to house miners, merchants and others looking to make their fortune in the Gold Rush, Chinese Camp is now virtually a ghost town. Restored in 1949, a few years after Ansel took this photograph, services have not been held there since the 1920s. Surrounded by graves and family plots, but once again in ruins, the Stockton Archdiocese has determined that they will save it for posterity and have started a restoration campaign.