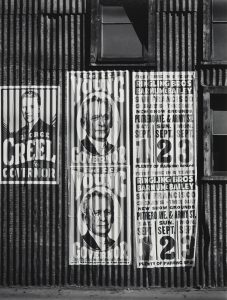 The George Creel political poster in this photograph touches on an interesting bit of California political history.
A progressive investigative reporter, who famously advocated for the lynching of senators who opposed public ownership of the local water supply and advocated for taking away billy clubs from police officers – he ran against the novelist Upton Sinclair in the Democratic primary for Governor in 1934. Shortly after US entered WWI, Woodrow Wilson established the Committee on Public Information, a propaganda agency to release government news and put George Creel in charge. Under his direction the CPI was hugely successful and is credited with the creation of public relations as we know it today, bringing to light the power of mass persuasion and social influence at a national level.