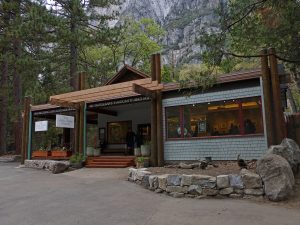 In the summer of 1902, a landscape painter and political cartoonist for the San Francisco Chronicle by the name of Harry Best took an excursion to Yosemite Valley to camp and paint. Little did he know that this trip would have, indirectly, such an impact on so many, or that we, his descendants, would be telling this story now, over a century later.

That summer he met Anne Rippey, a beautiful young woman working as an assistant in one of the photography studios in the Valley. After a whirlwind courtship, the two married on July 28 at the base of Bridal Veil Fall. After the ceremony, they stopped the incoming stagecoach to have everyone celebrate with them. (Rumor has it that several men were courting Ms. Rippey that summer, and Harry’s success lay in his persistence and having sent back to San Francisco for an engagement ring).

That winter, Harry applied to the U.S. Army, Yosemite administrators at the time, for a permit to operate a studio business. The following summer, in 1902, the Bests opened their studio in a tent in Yosemite Valley. Thereafter, Harry and Anne returned to Yosemite each summer, building the original Studio in the Old Yosemite Village in 1904.

Best’s Studio was a family affair from the earliest. Not only was it a husband and wife team producing and selling paintings, painted photographs, and photo finishing, but the Studio also represented Arthur and Alice Best, Harry’s brother and sister-in-law. Harry was successful both as a businessman and painter: Best’s Studio is the last of several artist’s studios that were established around the turn of the century, and paintings of his have hung in the White House and San Francisco’ s Bohemian Club for many years. His, and the company’s, success is attributed to a deep commitment to Yosemite National Park and the desire to share and create a positive Park experience for the visitors.

Harry and Anne’ s daughter Virginia was born in 1904, and grew up spending summers in Yosemite until 1926 when the family took up full time residence in the Valley. In those years, and for a long time thereafter, Best’s Studio was the social center of the Valley . It housed the only piano in the Park and the lovely singing voice of Virginia Best.

Ansel Adams first came to Yosemite National Park in 1916 and returned in 1920 as a caretaker for the Sierra Club’ s LeConte Lodge, still planning a career as a concert pianist. This goal brought him in close contact with the Bests, and Ansel soon found himself visiting the Studio as much for the company as to practice the piano. On January 2, 1928, Ansel Adams and Virginia Best were married in the newly constructed Best’s Studio in the “new village” in Yosemite Valley.

The addition of Ansel Adams to the family had a major impact on the business. At the time of the wedding, Ansel’s career as a photographer was just beginning. He had published, with the help of Albert Bender, his first portfolio in 1927, “Parmelian Prints of the High Sierra.” The Studio and Ansel had a symbiotic business relationship: Ansel providing high quality photographic material that appealed to visitors, and the Studio providing an outlet for his work and on-going financial support to a struggling artist. In this vein, The Ansel Adams Gallery continues to seek out and represent promising contemporary artists.

Ansel and Virginia had two children, Michael, born in 1933 in Yosemite, and Anne, born in 1935 in San Francisco. The family split its time between San Francisco, where Ansel still maintained the family home, and Yosemite. During the Second World War the family moved to Yosemite year round, and the children grew up in this idyllic spot. Ansel and Virginia published a children’ s story book, Michael and Anne in Yosemite , which still occasionally becomes available on the secondary market.

Harry Best passed away in 1936, and Virginia inherited the business that she had been running for some years. Around this time, Ansel and Virginia conscientiously shifted the focus of the Studio to offer merchandise and services that fit with an ethic to respect the landscape and draw inspiration and creativity from the beauty of the environment. This ethic continues to guide The Ansel Adams Gallery, and, while the standard is high, we think we have been successful in finding and developing artwork and services that fit this ethic. Reading was a life long passion of Virginia’s, and her interest embodied itself in a fine selection of books, and the book selection continues to be outstanding and widely complemented. Ansel and Virginia published a number of books, cards, and other photographic related items.

In the early 1950′s, Ansel initiated the Yosemite Special Edition Photographs, a series of Ansel’s photographs printed under his supervision and differentiated from his exhibition prints by price and presentation. The Ansel Adams Gallery continues to offer the Yosemite Special Edition, printed by Alan Ross. The Gallery is the exclusive source for these beautiful photographs printed from Ansel Adams’ original negatives.

The Photography Workshop program began in 1940, and was one of the first photographic education programs in the country. The original workshops were one week long with several instructors, and groups of 10 to 12 students worked with different instructors in field, classroom, and darkroom sessions. Many participants have told us that the workshop program with Ansel and the other professional photographers was a life shaping experience.

Virginia Best Adams operated the Studio until 1971, when she and Ansel turned the company over to Michael and Jeanne Adams, their son and daughter-in-law. During this time, the name of the business was changed to The Ansel Adams Gallery to reflect the primary focus of photography, and the powerful legacy that Ansel had in photography and environmental conservation. Photography and conservation are embodied in the person and work of Ansel Adams, and it is the purpose of the Gallery to encourage the values, efforts, and sense of awe that Ansel held and personified.